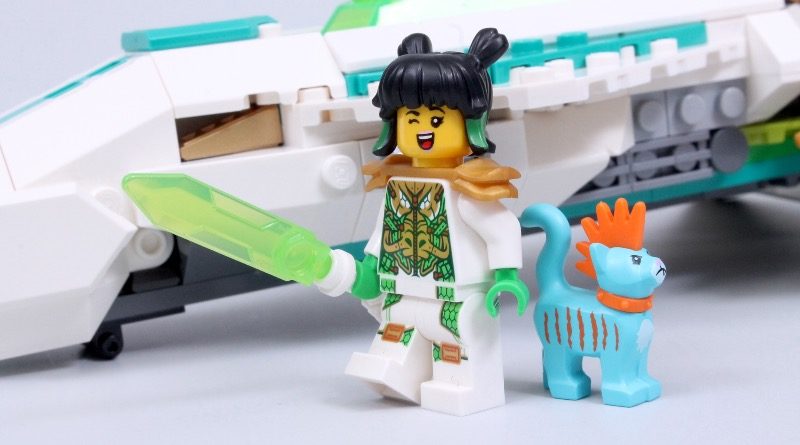 Monkie Kid continues to deliver some of the strongest sets in the LEGO Group’s line-up with 80020 White Dragon Horse Jet, a beautifully-realised vehicle that transcends the usual trappings of its price tag.

Developed first and foremost for the Chinese market, Monkie Kid’s appeal in the west was deemed to be so limited that the range is only available through official channels (LEGO.com and LEGO Stores). That’s a shame on two fronts: not only will its sets likely never see a discount, but there’s also a good chance they’ll be overlooked by plenty of fans.

It would be a mistake to miss out on 80020 White Dragon Horse Jet, though. This is a set where function meets fashion; where the careful use of colour becomes an art form in its own right; and where the build will leave you thirsting for more Monkie Kid. In our book, that’s no bad thing.

The box art for 80020 White Dragon Horse Jet displays that fashion loud and proud, but it’s actually function that comes first when you break those tabs. Side builds in a set of this size aren’t always welcome – £34.99 / $49.99 / €39.99 isn’t a huge budget to work with, so taking away pieces from the main build can prove detrimental – but you’ll definitely appreciate the accoutrements on offer here.

The first of those is the vending machine, which – as if by magic, but actually by very intuitive design – genuinely works. Slip a 1×2 tile (in this case, Si’s smartphone) into the appropriate slot, and out pops a 1×1 cylinder, topped with a printed 1×1 round tile. It’s a method we’ve seen before in 70657 NINJAGO City Docks, but there can be few complaints about reintroducing an approach only glimpsed in a now-retired £200 set.

Mo’s hoverboard comes next, and while it doesn’t share the same inspired functionality as the vending machine – a couple of stud shooters are all you’re getting – it does share the same proclivity for a bold, contrasting colour scheme, this time reflecting the Mohawk-sporting moggy’s vivid orange and blue fur. It manages that through only a handful of parts in a very brief build – but also makes Mo into more of a supporting character than the afterthought he might otherwise have been.

The final of the three supplementary builds pairs with the Spider Queen’s Huntsman to create an element of conflict in the set, although it’s probably no match for Mei’s jet. Instead, the six-legged spider (reassuring for arachnophobes, disappointing for realists) is clearly designed to capture Si in the web connected to the vending machine, presumably before being thoroughly obliterated by whatever firepower Mei is packing.

Together, these three miniature models could easily have felt like padding to boost the set’s part count, but because each one plays a definitive role in – and adds something very particular to – 80020 White Dragon Horse Jet, you’ll enjoy assembling them almost as much as the titular jet.

We say almost, because putting together Mei’s ride is a delight. That’s not only through the techniques involved – although there are a couple in there that may add a new string to your building bow, including the nose that anchors back-to-back sub-assemblies with an axle and clips, and the wings that disguise 2×2 corner tiles with 45-degree cut-outs as pentagonal tiles – but because of the striking colours you’ll get to play with, and the way they so brilliantly combine with the smart, angular nature of the ship’s part palette to create a model that’s as remarkable to look at as it is to assemble.

It’s as sleek as they come, imbued with all the character that its name suggests – both dragon and horse influences can be felt in spades – and just feels so cohesive and complete that you’ll struggle to really find fault with it. And, yes, it’s very swooshable.

Where some sets are very clearly a case of coming for the minifigures and (occasionally) staying for the build, 80020 White Dragon Horse Jet is very much the inverse of that typical LEGO loop: you’ll come for the jet (and the vending machine), and stay for three beautifully-realised characters (plus Si).

Mei is absent the helmet found only in 80023 Monkie Kid’s Team Dronecopter, but her hairpiece is arguably more interesting anyway. She’s otherwise one of the best minifigures to come out of the entire Monkie Kid theme, with two distinct – but equally appealing – face prints, and a colour scheme to match her brilliant jet.

The equally-detailed Huntsman also pops up in 80023 Monkie Kid’s Team Dronecopter, while Mo is unchanged from his earlier appearances last year. That makes Si the only genuinely exclusive character in 80020 White Dragon Horse Jet – but he’s also the least interesting.

This is still a solid selection of characters if you’re only just dipping your toes into the Monkie Kid theme, though, and between them they represent a whole lot of play potential alongside their corresponding builds (and, happily, they all have one – so nobody feels superfluous).

It’s not often you’ll find a set so clear and confident in its design at £34.99 / $49.99 / €39.99, and particularly when some of its budget has been devoted to side builds. But it’s hard to pick out anywhere in Mei’s jet that might have benefited from a little extra care, or a few more pieces – this is a model meant for this price tag, which just makes it even sweeter that it’s so affordable.

Monkie Kid sets will practically never see a discount, but that shouldn’t prevent you from picking up 80020 White Dragon Horse Jet, which – to risk giving the LEGO Group ideas – would still have been an easy recommendation at £39.99, or even £44.99. (We’d need at least one more minifigure to go higher than that.)

Between NINJAGO’s 71746 Jungle Dragon and 80020 White Dragon Horse Jet, it’s a very good time to be a LEGO fan on a budget. Where some sets necessarily sacrifice some element of their design to the great budget gods in the sky at this level – be that in their build or minifigure selection – this mid-range Monkie Kid model doesn’t feel like it’s been compromised at any step of the way.

The result is a work of LEGO art that won’t break the bank (unlike, you know, LEGO Art), offering that killer combination of an incredible display model, plenty of play potential and a satisfying line-up of beautifully-designed minifigures. And as an entry point into the often-overlooked wider world of Monkie Kid, you won’t do much better.

Support the work that Brick Fanatics does by purchasing your LEGO Monkie Kid sets through one of our affiliate links.

With more than 500 bricks in the box, 80020 White Dragon Horse Jet offers a surprisingly involved build for its price, taking roughly 50 minutes to put together.

How many pieces are in 80020 White Dragon Horse Jet?

You’ll find exactly 565 pieces in 80020 White Dragon Horse Jet, spread out across four different models – but none of them suffer for sharing that part count.

How much does 80020 White Dragon Horse Jet cost?