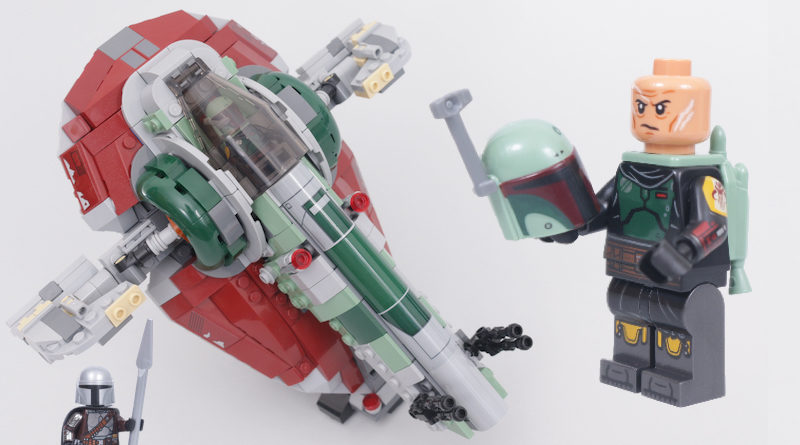 75312 Boba Fett’s Starship is the LEGO Star Wars Slave I set that you didn’t realise how much you needed – until now.

It may come in at half the piece count of 2019’s 75243 Slave I – 20th Anniversary Edition, but 75312 Boba Fett’s Starship is just the latest – and so far best – example of LEGO Star Wars’ creative direction to offer as much of the same detail, technique, play and outright fun in models at half the budget.

You are going to need to look beyond that one particular minifigure included in this set (even if he does live up to the billing), because 75312 Boba Fett’s Starship is one of the most special LEGO Star Wars sets in recent years.

To be honest, we didn’t expect to like 75312 Boba Fett’s Starship all that much. In spite of singing the praises of the LEGO Star Wars design team for the recent decision to reduce the size of some of its recent sets and still hit all the key design points, we didn’t hold the highest expectations for a minimised Slave I, for a couple of reasons simply based around what we have had (read: been spoiled with) in the past three years.

First there is 75243 Slave I – 20th Anniversary Edition, the UCS-set-that-isn’t-a-UCS-set from just two years ago that nailed every detail to the iconic ship so perfectly and even introduced a new level of interactivity with the built-in handle. To release any version of the same ship so close to that has to draw unfavourable comparisons…

And combined with that is a look at the pint-sized Slave I we got in 2018’s 75222 Betrayal at Cloud City. It’s cute and worked very well for its place within that diorama set, and indeed, it was the all-round positive reception that it received that started the whole creative direction of smaller sets for the LEGO Star Wars team, as they recently told Brick Fanatics in interview.

But for what that tiny Slave I had in charm, it lacked so very much in plausible detail, while its proportions were all over the place. That Slave I worked so well as a gimmick in a larger set, but any version of it as an actual standalone set would surely suffer from the same issues.

Yet, here we are almost struggling to find the words to tell you just how remarkable 75312 Boba Fett’s Starship is. It takes all the detail, accuracy, play and total enjoyment of 2019’s 20th Anniversary Slave I and packs it into a smaller size of build with all the charm and appeal of 2018’s Cloud City Slave I (and thankfully is a bit bigger than that one).

Interestingly, 75312 Boba Fett’s Starship has been designed primarily by the same LEGO Star Wars designer behind 75243 Slave I – 20th Anniversary Edition – Design Manager Michael Lee Stockwell – and he has explained to Brick Fanatics the very particular approach he took to ensure it hit all the same design points as its larger predecessor. It’s an approach that, on the face of it, sounds simple enough, but within the context of significantly scaling down the model, makes what he and the rest of the LEGO Star Wars design team has achieved with 75312 Boba Fett’s Starship so remarkable and fascinating.

In many ways, it is 75243 Slave I – 20th Anniversary Edition or even 2015’s UCS 75060 Slave I to have in mind when building 75312 Boba Fett’s Starship. It may be a lot smaller, but it carries all the same traits of packing in such technical and tight building across multiple direction changes and curious angles. We also use the word ‘tight’ quite deliberately, as this is the most precise understanding and application of LEGO brick and piece measurement we have seen since, well, what Rok Žgalin Kobe continually achieves in the Architecture theme. It’s an approach that at a couple of points will have you almost having to force sections of the model together, depending on how exact you have been in placing each piece together in build-up.

That so-very-precise approach is the reason for the feeling of puzzlement at how a piece count of 593 creates a LEGO model of such relatively small size. But where 75315 Imperial Light Cruiser leaves you with that same sense within a negative perspective, there is a more immediate understanding and appreciation of value in 75312 Boba Fett’s Starship. You know and can see where every piece has been used and is required, because of how exact the final model is, and how – as the LEGO Star Wars team intended – it ticks all the same boxes as the larger Slave Is of before.

That’s in the profiles of the ship from almost any angle, including most importantly the rather particular angle of the ship’s hull; the colouration across the entire model of a mix of grey and sand green; the slopes of the dark red lower section weathered with some well-placed stickers; the proportions of each section in relation to one another; the moving wings as you change angle of the ship; and even storage space for a carbonite-frozen bounty.

All of it comes together for the most unexpected LEGO Star Wars set of recent times – at this size and with such fresh, larger versions of the very same ship to compare it against, there should be feelings of dissatisfaction and disappointment. Instead, this is just another way you didn’t realise you could fall in love with one of Star Wars’ most iconic ships from across its 44-year history.

What’s more, at this size and with the new bonus of a display stand (cleverly integrated into the set as a little drivable loading unit), this is a more practical version of Slave I to leave out on display and to pick up and play around with.

There’s so much packed into 75312 Boba Fett’s Starship that delivers above expectations of what should be possible at this scale. All we can say is, can we have more LEGO Star Wars sets like this moving forward please?

Quite obviously the initial draw to 75312 Boba Fett’s Starship for most won’t be the LEGO set at all, but the eponymous, returning bounty hunter, and that’s nothing to be cynical about – just look at him. For a character with such a long run in LEGO Star Wars stretched out over 21 years, it’s quite something to be able to enjoy a brand new look, from the repainted helmet and body armour to the black robes now worn underneath. The printed arms and legs help complete the masterpiece and ensure the LEGO minifigure version of older Boba Fett from The Mandalorian is exactly what every fan wants.

Also included is a Beskar-armour version of Mando complete with blaster rifle and Beskar spear. Just as beautiful a minifigure in design, except for how really the print on the helmet could be raised a couple of millimetres so he doesn’t look so short…

Pricing 593 pieces and two minifigures at £44.99 / $49.99 / €49.99 represents LEGO Star Wars’ shift back to a more reasonable level of value that – particularly with Sequel Trilogy sets – had been somewhat lost.

Matching that general improvement in value with a LEGO model at the level of 75312 Boba Fett’s Starship makes this a must-have, buy-on-release set.

First impressions of 75312 Boba Fett’s Starship may negatively focus on its reduced size or indeed completely ignore the model in favour of the brand new Boba Fett included. These would be mistakes to make.

75312 Boba Fett’s Starship is detailed enough to deliver on expectations placed on LEGO Star Wars sets twice its size – it has no right or real need to be as good as it is for the price and piece count it comes to, yet it is one of the best examples of the level of creativity and dedication that the LEGO Star Wars team try to bring to every model that they produce.

It’s the version of Slave I you thought you could overlook, but that will actually give you not only a newfound way to fall back in love with the ship, but also a wider appreciation – and reminder if it was needed – of just why LEGO is a creative tool like no other.

Support the work that Brick Fanatics does by purchasing your LEGO Star Wars through one of our affiliate links.

How long does it take to build LEGO Star Wars 75312 Boba Fett’s Starship?

It takes just over an hour to build 75312 Boba Fett’s Starship, but may take inexperienced builders a little longer. This is an intricate model to put together, and one to enjoy too.

How many pieces are in LEGO Star Wars 75312 Boba Fett’s Starship?

There are 593 pieces included in 75312 Boba Fett’s Starship, and two minifigures including a new design for Boba Fett reflective of his appearance in The Mandalorian.

Sat on its display stand, 75312 Boba Fett’s Starship measures 29cm tall, 18cm deep and 20cm wide. It’s the same width in landing mode, where it also measures 21cm long and 11cm tall to the highest point, the tips of the twin blaster cannons at the end of the hull.

How much does LEGO Star Wars 75312 Boba Fett’s Starship cost?

As one half of Tiro Media Ltd, I mix a passion for print and digital media production with a deep love of LEGO and can often be found on these pages eulogising about LEGO Batman, digging deeper into the LEGO Group’s inner workings, or just complaining about the price of the latest LEGO Star Wars set. Make a great impression when you meet me in person by praising EXO-FORCE as the greatest LEGO theme of all time. Follow me on Twitter @RobPaton or drop me an email at rob@brickfanatics.com.