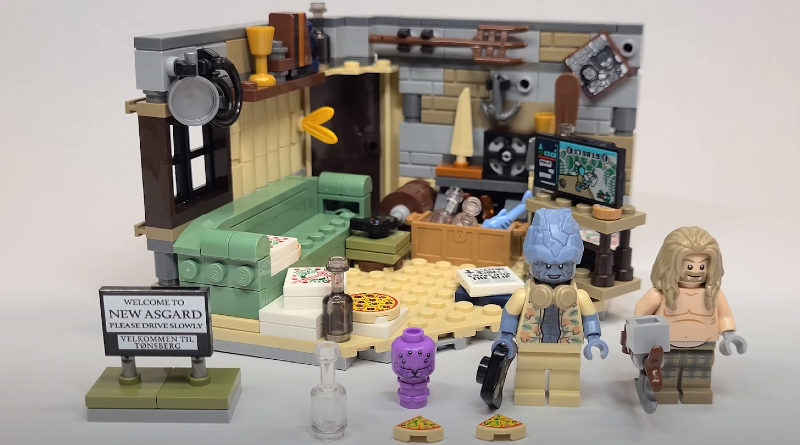 Look Thor-ward to the next LEGO Marvel 2021 set as the first reviews for 76200 Bro Thor’s New Asgard have landed online, revealing the inner details of the unique model.

The upcoming LEGO Marvel 76200 Bro Thor’s New Asgard has been sent out to YouTuber Ashnflash early, taking us on a tour of the Norse God’s most comfortable home in the MCU yet. Whilst the pizza-covered floors might not be as graceful as the golden halls of Asgard, the new set does bring the very first LEGO iterations of Korg and Miek.

Taika Waititi’s rocky character is likely to be the highlight of the build for most, with a new piece and torso print complete with dual moulded arms. As if that wasn’t enough, the minifigure also comes with an alternate face for when the digital matches aren’t going as well as he hopes.

Korg is joined by Thor and Miek, both of which are represented with all-new designs for the plastic counterparts, including a many-eyed headpiece – all the better to see the game with we suppose.

The rest of the build won’t astound anyone wanting a challenging experience but the references scattered throughout are more than likely to please fans of Marvel and LEGO alike. One of these comes in the form of the TV screen, which isn’t depicting a match of Fortnite as it does in the movie. Instead, this LEGO game depicts Korg dual-wielding both Mjolnir and Stormbreaker – who knew that the ex-Sakaarian gladiator had such lofty ambitions?

“This is a really interesting set and it sets a cool precedent for future Infinity Saga sets,” commented Ashnflash. “I think that the main thing to come out of this is that they’re if doing a diorama like this, well where’s the WandaVision one? Come on LEGO!”