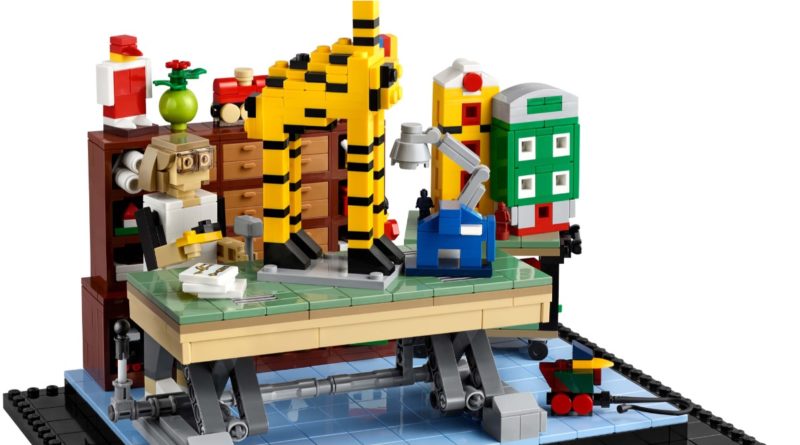 The set is a tribute to Dagny Holm, the LEGO Group’s very first Master Builder. Born on May 18, 1916, she was the niece of LEGO founder Ole Kirk Kristiansen and first interned at the company in 1936. Her work began in earnest in 1961 and she distinguished herself with her cubistic, realistic set designs. She also contributed all of the initial model designs for Billund’s LEGOLAND Park, which opened in 1968.

Dagny retired as the LEGO Group’s chief engineer in 1986, when she was 70 years old. She died on March 1, 2004; some of her early work is currently on display within LEGO House itself.

The tribute model recreates Dagny Holm at her workbench, surrounded by various colourful LEGO models. A set of six exclusive printed tiles reference her career with the LEGO Group, and other historical references – like the iconic wooden duck – can also be found here. The finished model measures 25cm wide, 19cm deep and 14.5cm tall.

With many colourful and unusual elements, this is a wonderful souvenir for visitors to LEGO House. It costs 599 DKK, which equates to just over £67, $90 or €80. It can only be bought at this location, making this a particularly special and sought-after model.

Support the work that Brick Fanatics does by purchasing your brand new LEGO sets using our affiliate links.