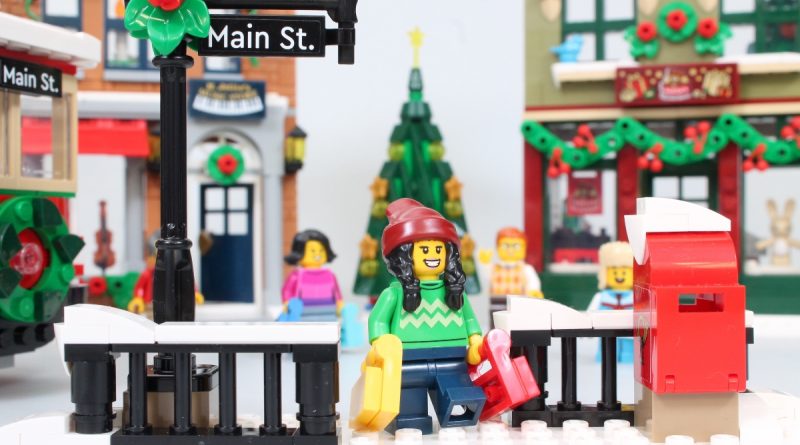 We’ll stop complaining about the bland black box art given to 18+ sets when it stops completely underselling them, which definitely hasn’t happened with 10308 Holiday Main Street. When they’ve all come together, its two buildings, tram, Christmas tree and small slice of snowy scenery aren’t half bad – but you wouldn’t know it from looking at that box, which is entirely absent of the Christmas spirit.

This is all to say that you shouldn’t let 10308 Holiday Main Street’s packaging put you off giving it a go, because it’s still a decent entry into the Winter Village Collection. But even in the flesh, its move downtown doesn’t quite hit the same festive highs of its predecessors…

LEGO Winter Village 10308 Holiday Main Street launches on October 3 for VIP members and October 7 for everyone else at LEGO.com and in LEGO Stores. Chances are it will show up through at least one third-party retailer, but it’s not likely to be widely available elsewhere.

Like several recent sets, 10308 Holiday Main Street is geared around building with family and friends. That means each of its four components – the two buildings, the streetcar and the Christmas tree/scenery – has a separate instruction booklet, allowing up to four pals to build together at once. Of course, that means the division of labour isn’t entirely proportional: whoever gets to assemble the Xmas tree will be done long before everyone else.

It’s a compartmentalised build for a compartmentalised set, which – when all’s said and done – feels disparate in a way that no Winter Village model has for a while. 10293 Santa’s Visit, 10275 Elf Club House and 10267 Gingerbread House all offer large, single builds (each with a Christmas tree side-build), while you have to go all the way back to 2013’s 10235 Winter Village Market to find a seasonal set that feels as separated as 10308 Holiday Main Street.

That’s not inherently a bad thing, but it does mean that the 1,514 pieces here are stretched pretty thinly between its four separate components. It’s actually the tram that gets the most love, with instructions (and additional pieces) included to incorporate Powered Up components, which makes sense given this is the first vehicle of its kind in the Winter Village Collection.

The end result, though, is that the rest of the set feels a little lacking – most prominently those two buildings, the interior space of which reaches five studs at the maximum. That makes them the shallowest buildings in the entire Winter Village line-up (with the exception of 10235 Winter Village Market’s stalls), so there’s not a whole lot of room for interior detail, but they do make efficient use of what little space there is: the kitchen built into the apartment above the music store feels straight out of a modular building, while the products lining the shelves of the toy store are fun little sub-assemblies.

Those interiors are really the most enjoyable part of this entire build, which is ultimately over far too quickly – and far too easily – for both its price and the 18+ tag on the box. It circles back round to 10308 Holiday Main Street feeling muddled in its pitch: this is a simple build, relatively free of interesting building techniques, and is clearly designed for play first and foremost. The official lifestyle images even show a parent and kid playing together. But then why market it towards adults? Why go with that awful box art?

Changing the packaging wouldn’t change what’s inside the set, of course, but it would at least help to adjust expectations. If you’re hoping for a Creator Expert level of build from 10308 Holiday Main Street, you’ll probably be disappointed. If you’re instead just looking for a quick and easy addition to your Winter Village, you might be a little more pleased – but only if you’re also happy with a set that seems weirdly restrained in its festivities.

Where some Winter Village models embrace the sillier side of Christmas – 10245 Santa’s Workshop, 10275 Elf Club House and so on – others lean into a more realistic (but still magical) depiction of the season. 10308 Holiday Main Street has gone almost too far that way, stripping away the bright colours of its predecessors to leave us with a drab mix of nougat, olive green and tan, with a small smattering of red and green.

It’s maybe more reflective of a real-life high street, with limited décor on its storefronts, but comes across more ‘downtown’ than ‘village’ – and ultimately doesn’t quite jive with the rest of the Winter Village Collection. It’s not entirely without its charm, but there’s definitely less of it here.

Six minifigures are included to embellish the scene, offering a nice mix of ages, genders and styles. They’re all reasonably generic, as you’d expect from a set like this, but there are a couple of stand-out parts, like the tram conductor’s torso – previously exclusive to 21335 Motorised Lighthouse – and the toy store owner’s sweater.

A proper ugly Christmas sweater might have sweetened the deal, but there’s enough here to populate everything included, even if this is the only LEGO set you own. You can’t ask for much more than that. (Those alternate carol-singing faces are great, too.)

While prices across the LEGO portfolio soar – including on last year’s 10293 Santa’s Visit, which has had a modest bump of £10 in the UK – the LEGO Group has managed to keep 10308 Holiday Main Street below £90 / $100 / €100, and to some relief. The value proposition feels about right here, too: there are a lot of pieces in the box, but most of them relatively small, so any more expensive than this would have been tough to bear.

As is, you won’t need to cancel Christmas to be able to afford this one. Phew.

When is a LEGO Winter Village set not a LEGO Winter Village set? When it’s a LEGO CITY set with a bit of snow and a Christmas tree. That’s really what 10308 Holiday Main Street feels like, for better and worse: it’s taking the annual subtheme to new places, sure, but it’s also perhaps leaving behind the charm and festivity that distinguished it from the rest of the LEGO line-up in the first place.

There’s fun to be had here, but you might end up giving in to the urge to swap out some of the colours, add a little more snow and sprinkle around a few more festive decorations. That’s the beauty of LEGO, but you’d expect a Winter Village set to be good to go out of the box – no matter what’s on the front of it.

If you want something a little more festive, aim for the retiring 10275 Elf Club House or even last year’s 10293 Santa’s Visit. For a cheaper Christmas build, 40499 Santa’s Sleigh hits the sweet spot with four reindeer and Santa himself – as long as you can find it in stock.

How long does it take to build LEGO Winter Village 10308 Holiday Main Street?

LEGO Winter Village 10308 Holiday Main Street flies together pretty quickly, so expect to spend around two hours putting it together. That’s just enough time to squeeze in viewing of a festive classic, like Home Alone, Elf or Die Hard.

How many pieces are in LEGO Winter Village 10308 Holiday Main Street?

There are exactly 1,514 pieces in LEGO Winter Village 10308 Holiday Main Street (plus a few spares, as with any LEGO set), which also includes six minifigures.

How much does LEGO Winter Village 10308 Holiday Main Street cost?