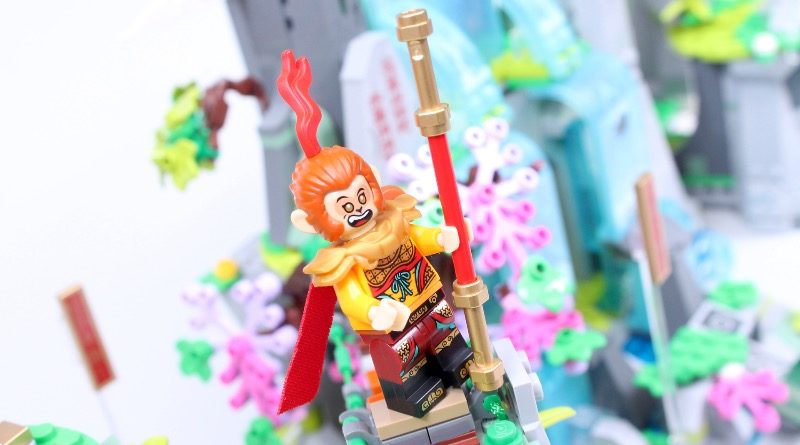 The second-biggest Monkie Kid set to date dives deep into the mythos of the Monkey King, making for a LEGO model unlike any other.

While the majority of the Monkie Kid sets so far have leaned into the theme’s title character – and all the wacky adventures that surround the LEGO Group’s modern re-telling of Journey to the West – 80024 The Legendary Flower Fruit Mountain instead turns back the clock to reveal the origins of Sun Wukong (or the Monkey King).

It’s very rare that we see playsets given the kind of scope and budget afforded to 80024 The Legendary Flower Fruit Mountain, and rarer still that a set so confidently communicates a singular narrative in just its characters and build – but those are all accolades on display here, and 2021’s flagship Monkie Kid set is all the better for them.

It’s not often that the story-driven aspects of a LEGO set are told through the build process, but that’s exactly what you’ll find in putting together 80024 The Legendary Flower Fruit Mountain (the first of several reasons why this is a singularly unique model in the wider portfolio).

You’ll need a little prior research to dig into the details – like the fact it’s based on the real-life Mount Huaguo in Jiangsu province, China, or that its central waterfall is known as the Water Curtain Cave – but the broad strokes are clearly woven through the set’s 18 numbered bags, which see the sprawling, horizontal model take shape from right to left in a completely chronological fashion.

To give a brief overview of the narrative behind 80024 The Legendary Flower Fruit Mountain: Sun Wukong is born, hatched from a stone egg that – with the pull of a lever – springs open to reveal the baby inside; the new-born plays among the flowers and fruit with his (weirdly diminutive) siblings; Sun Wukong charges through the waterfall into Shuilian Cave and earns the title of Monkey King; he battles the evil Macaque; and finally, he takes his rightful place on the mountain’s throne.

You’ll pick most of that up simply from building the set, with really only the ‘rushing through the waterfall’ bit needing much clarification from our good old friend Wikipedia. There is one slightly disparate element to the story, though: the Apprentice Monkey King is situated aboard a raft beneath the throne, which might have worked better between the right-hand section and the waterfall. However, that’s really only a minor criticism in what’s otherwise a very fluid and logical build.

Narratively speaking, anyway – at times, the construction process itself feels anything but logical. In fact, it’s actually more reminiscent of the classic LEGO experience many of us probably had in our childhoods, slapping seemingly random bricks together and hoping it eventually resembles something vaguely interesting.

Thankfully, that’s exactly what happens here, as the otherwise curious layering of slopes, plates and wedges slowly but surely opens up into an elaborate – but very deliberate – display of LEGO landscaping. It doesn’t pay off at every moment, with some areas feeling unfinished and others overworked, but these are rare instances in what’s generally a very satisfying build.

Much of that satisfaction comes from the variety baked into the set, even across what might otherwise have been identical sub-assemblies. One moment you’re connecting 1×2 plates with ladders, the next – oh, look, another way to build a tree, or a bird; then – rocks, clouds, a waterfall, a rope bridge. All these elements come together in a way that keeps you engaged throughout the entire build, tossing up surprises at every turn.

The sheer scope and scale of 80024 The Legendary Flower Fruit Mountain also lends itself well – as many large sets do – to building in detail with elements rather than relying on stickers, but that’s not a universal truth across the entire set.

The large trans-blue panels that comprise the waterfall are stickered, for instance, and that means the set’s entire sticker sheet rests on the fingerprint magnet that is transparent backing. You can see why it had to be done, but it doesn’t make applying and aligning those decals any less frustrating.

Those stickers aren’t the only points of contention here, either – for while there’s plenty to be said for 80024 The Legendary Flower Fruit Mountain, it’s not entirely perfect. The area behind the waterfall comes across a little half-hearted, and there’s a curious lack of studs on which to place minifigures for what’s ostensibly a playset.

That descriptor also doesn’t feel particularly fitting when it comes to the functions: there are a handful, most notably in splitting the stone egg, using a rock to prise apart the waterfall (to allow Sun Wukong to rush through), and in the splat gear mechanism that allows the Monkey King and Macaque to duel. But that still feels too few for a set this size, particularly given how it already lends itself to even more.

The rope bridge could break away, for example, while the open space for the final showdown feels ripe for more traps or interactive features. These are small complaints, and chances are most adult fans will just be popping it on the shelf anyway – but if you’re eyeing this up for the younger LEGO fan in your life, it’s worth bearing in mind that the play experience can be a little frustrating at times.

Of course, that can’t detract from just how good 80024 The Legendary Flower Fruit Mountain looks on display – and by the time you place the finishing touches on the Monkey King’s throne, you’ll only be able to marvel at the expansive, dramatic and totally unique model sitting in front of you.

Just as 80024 The Legendary Flower Fruit Mountain sits distinct from every other Monkie Kid set released so far, so too do its minifigures – all eight of which are brand new and unique to this model. Some of them are only slight variations on previous designs (MK essentially swaps headphones for a hood), and seven of them (everyone else) are some variation of a monkey, all sporting the same headpiece in different colours.

It’s very rare to find four different versions of one character in the same set, however, which is really only testament to how heavily 80024 The Legendary Flower Fruit Mountain leans into its narrative. Alongside Baby, Classic, Apprentice and Battle forms of the Monkey King, you’ll also find the short-legged Brother Monkey and Sister Monkey, MK, and – perhaps the set’s highlight – the Evil Macaque.

The latter minifigure is essentially a colour-swapped version of Battle Monkey King, but injecting a little darkness into the design is somehow enough to place him head, shoulders and tail above the rest. Speaking of tails – there’s a new one here that sits flat against the minifigures, offering some welcome variety and opening up display options in more confined spaces, of which this set has its fair share.

All in, it’s hard to balk at eight completely unique minifigures in a single set. A second antagonist might have introduced a few more play options, but it wouldn’t necessarily have been authentic to the original story.

That’s not to say this is an easy recommendation at £159.99 / $169.99 / €169.99, because that’s still a hefty price tag with some serious competition from some of the LEGO Group’s best sets. Coming in at a similar bracket are – for example – 10278 Police Station, 10283 NASA Space Shuttle Discovery and 75308 R2-D2. Those are all wildly different sets serving wildly different purposes, but if your LEGO tastes are broad, you may find your attention pulled elsewhere.

If you’re craving something distinct from the LEGO Group’s usual plethora of vehicles and buildings that fill the £150-200 slot, though, there’s just about enough here to warrant full price – which is likely what you’ll need to pay given Monkie Kid’s exclusivity to official LEGO channels.

Where Monkie Kid has otherwise so far skewered the LEGO Group’s classic tropes of vehicles, mechs and bases, 80024 The Legendary Flower Fruit Mountain offers a dramatic change of direction for the China-focused theme. From its narrative-driven build to the storytelling further opened up by its many unique minifigures, this is a set unrestrained by the shackles of traditional LEGO formats – and it’s all the better for it.

The asking price may feel steep in some respects, and places it in direct competition with some of the best LEGO sets around at the moment. But just as with at least one other Monkie Kid set released in 2021, its LEGO.com/LEGO Store exclusivity and unfamiliar source material shouldn’t prevent you from taking a leap of faith into what’s increasingly looking like one of the most exciting themes around at the moment.

How long does it take to build LEGO Monkie Kid 80024 The Legendary Flower Fruit Mountain?

As with any set of this size, building 80024 The Legendary Flower Fruit Mountain is a marathon, not a sprint. That said, experienced builders should be able to put it together in roughly two and a half hours, with the stickers accounting for a fair chunk of that time.

How many pieces are in LEGO Monkie Kid 80024 The Legendary Flower Fruit Mountain?

80024 The Legendary Flower Fruit Mountain is an incredibly wide set, demanding 68cm of real estate along the horizontal axis. It fares well in other dimensions, too, coming in at 34cm tall and 25cm deep.

How much does LEGO Monkie Kid 80024 The Legendary Flower Fruit Mountain cost?