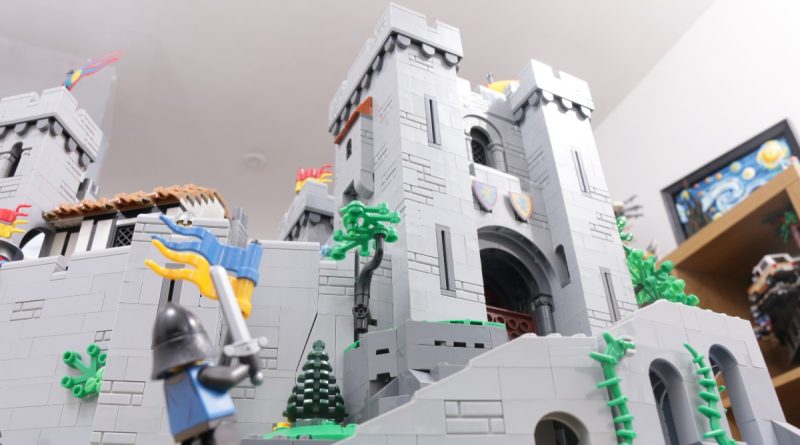 Contrary to what many people think, LEGO pieces aren’t getting more and more specialised. It’s just the opposite in fact.

It’s a common refrain, particularly from adults who remember LEGO from their childhood, but who now see the new sets that their children play with. ‘All these specialised parts! Back in my day it was all so much simpler!’ Well maybe –  just maybe – that’s not actually the case. In a recent interview with Metro, two designers from the LEGO Group, Milan Madge and Mike Psiaki, were talking about castles and spaceships, but soon got on to other things.

Mike and Milan are responsible for two of the flagship sets that are spearheading the LEGO Group’s 90th anniversary celebrations – 10497 Galaxy Explorer and 10305 Lion Knights’ Castle.  They were happy to talk about those but soon the conversation turned more more general topics: what it’s like to be a LEGO designer, the importance of the minifigure and so on. And then Mike touched on a topic that seems to bug a lot of people who return to LEGO after they’ve been away from the the hobby for a while.

“I think part of what’s changed is the diversity of elements in our portfolio.” said Mike Psiaki. “It’s a very interesting thing to look at because we don’t actually have… well, I don’t know the numbers, but the last time I checked we don’t actually have more elements than we did in, say, the 80s. It’s just that the elements we make today, we make much more multi-purpose building pieces.”

He went on to describe the way things ‘used to be’ from a LEGO designers viewpoint. “…in the 80s you would make a special spaceship cockpit or a special spaceship thruster or a lift arm for a catapult… so any one theme would have its 15 or 20 special elements that would really not get used outside of that.”

This, of course, is the very argument that people often level at the LEGO elements of today – too many pieces that only have one use.  Milan disagreed, and history seems to bear him out.  “…look at the castles,” he said. “for example, not so much the yellow castle, but all the grey castles from the 1980s are mainly built out of big pre-fabricated wall elements that are just a wall with a window and some brick decoration on it. And the new castle that we’ve built is just made out of regular 1×4 LEGO bricks.”

The walls aren’t the only part of the Lion Knights’ Castle that has benefited from parts re-use. Mike jumped in and talked about the castle crenellations – the distinctive ‘teeth’ on the tops of the walls: “the piece I was gonna mention is the piece that’s on top of the walls that kind of forms the top of the crenellations. We call it a bread piece, but it was originally made to build picture frames for Dots.”  And there was more. He continued: “the thatched roof is made from a claw piece that was made for Nexo Knights. That kind of reuse of parts was much less prevalent 30 years ago.”

So in the same way that Creme Eggs weren’t necessarily bigger when we were children, maybe LEGO elements weren’t always better in the past either.

You can help support the work that Brick Fanatics does by purchasing your LEGO via our affiliate links. Thank you.

One thought on “Specialised LEGO elements are nothing new, say designers”