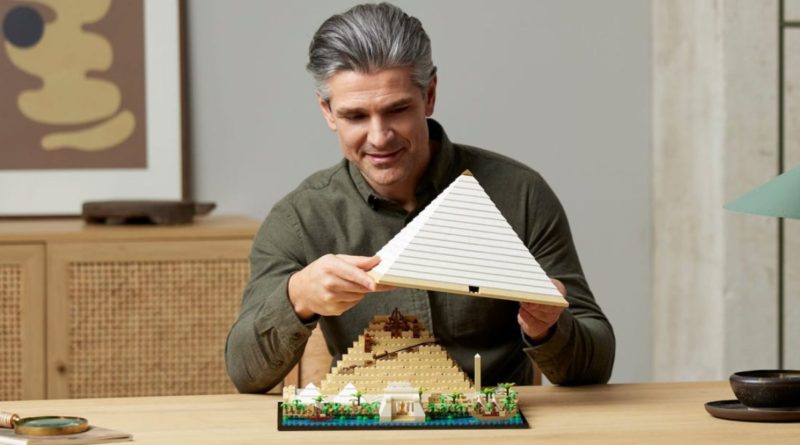 21058 Great Pyramid of Giza – an ambitious LEGO Architecture set – has received a price reduction via the latest Zavvi LEGO discounts.

The Great Pyramid of Giza certainly lives up to its name; it is the largest pyramid that Egypt has to offer, built over a period of almost three decades for the pharaoh Khufu. It is currently just shy of 140m tall, with 2.3 million stone blocks used in its construction.

21058 Great Pyramid of Giza recreates the pyramid in its glory days, when its outer surface was covered in white limestone. Measuring 20cm high and 35cm wide, the resulting build offers a sleek, uniform structure which is capped with a golden element. This entire outer shell can also be removed, showing the pyramid at an earlier stage of construction.

Spinning the pyramid around shows some of its internal chambers, as well as the tunnels connecting them. The back of the pyramid is flat, allowing two copies of the set to be connected together.

The set also models some of the surrounding area which includes a pair of smaller pyramids, a workers’ village and a stretch of the Nile river. Two boats bringing supplies can be seen here, bringing a little life to this Egyptian tomb.

In short, this is a highly impressive LEGO Architecture set – and one that any student of ancient cultures can’t afford to pass up. Buying this set from Zavvi will incur a £1.99 delivery charge, although US fans can pay just £3.99 for international shipping.